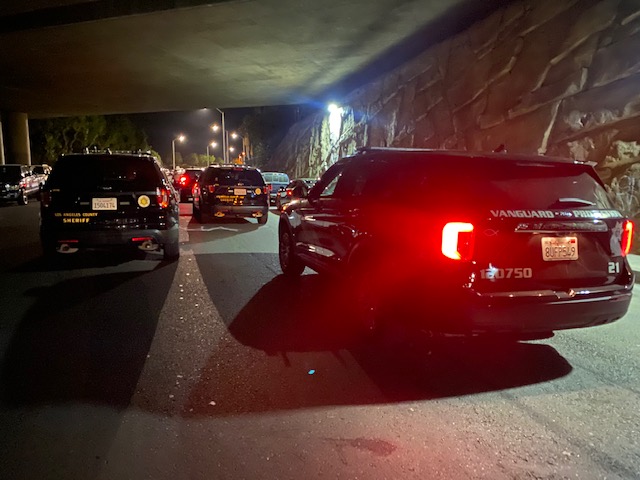 In the early morning hours of May 19th, a Vanguard Protection Patrol Officer assigned to the Canyon Country patrol area was driving south on Jakes Way under the 14 freeway. As he passed several vehicles parked along the street, he noticed that one appeared to have graffiti spray painted on it. Due to the recent ongoing auto burglary trends in the area, the Officer turned his patrol vehicle back around to investigate. After turning his patrol vehicle around the Officer observed two male Hispanic subjects wearing hooded sweatshirts run out from behind the parked vehicles and flee over a fence into the nearby riverbed. The Officer immediately notified the Los Angeles County Sheriff’s Department who sent Deputies to assist. After conducting a search of the area, it was found that several vehicles parked along the street had been burglarized, and also vandalized with graffiti. However, due to the low light conditions and vast area of the riverbed, a safe search could not be conducted at the time. As the sun came up several hours later, one of the subjects was discovered attempting to break into another vehicle nearby and was successfully apprehended; several stolen items and spray paint cans were discovered inside his vehicle. At this time Deputies are still searching for other suspects, additional victims, and the investigation is ongoing.